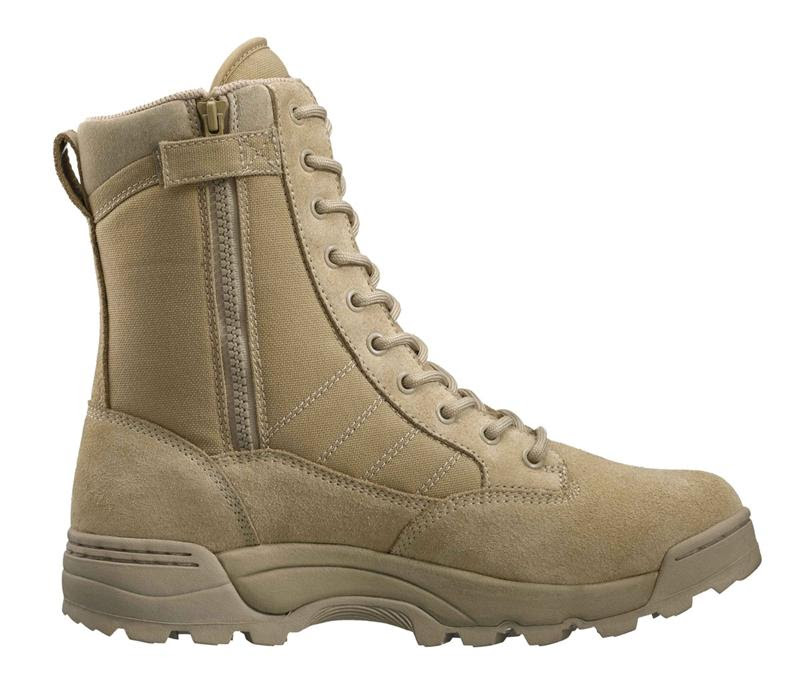 In case you are a new reader to the blog, I feel it is necessary to link you to the review of the 5.11 ATAC Boot w/ Side Zip since to date, it is the golden standard to which I measure all boots up to. Here is the link to that review REVIEW: 5.11 Coyote ATACs 8inch. Have you read that one yet? Ok, good, so you probably know now that after going through a pair of those boots every six months over the last year and a half, I was in pretty bad need of some different footwear than 5.11 offerings both on and off the field. There was a sale on Original SWAT boots down at First Response Duty Gear back in mid June-early July, and I decided that there was no better time than the present to check out the offerings of a non 5.11 Tactical company. Of course, since I have enormous mutant feet, I had to find a size close to what my feet were and then guess what size I should order. On to the fit and feel of the boot.
At first try on, they feel about as good as the 5.11 boots, at least around the sole, but they lack some of the additional padding which the ATAC boots have running up the back of the ankle. As a result, I've developed some blistering on the skin over my heel bone due to the lack of cushioning. I can't complain about any other friction or pressure points with the boot, however. In spite of the boot being a 9 inch boot, I have found that it feels like the top of the boot rests at a lower point on my leg than 5.11's 8 inch ones, and to this day it still feels a bit alien to wear them. This might be due to the fact that I continually switch between my nearly worn out 5.11 boots and the newer Original SWAT's.
Design wise, the boots leave a lot to be desired. Although they have a few features that the 5.11's have, the features aren't nearly as heavy duty. The side-zipper isn't as robust, though I can't say that it's ever given out on me. The anti-bacterial sole doesn't do as good a job at minimizing foot odor. The boots have no one-way ventilation points on the inner sole like the 5.11's. Along the back and front of the sole, there are two layers of very wide stitching which for me have broken in several places so I now have tassels on the bottoms of my boots; I have no idea what these are for in regards of the construction of the boot but given how huge the stitches are, they can't possess any structural purpose. Last comment is regarding the quality of the materials used in these boots. Although they are still wearable and in one piece, they are deteriorating, especially where the boots have to flex. There are small holes forming on either side of the base of the ankle on them and it won't be long before the holes are the size of the eyelets the laces are woven through.
The chief redeeming quality of these boots is the soft sole they have, it's nice to walk on, and it's significantly softer than the 5.11 boot sole, albeit, the sole and treading is quite a bit thinner. I accidentally developed a clever means of testing the softness which involved foot breaking on a longboard and seeing how effectively the boot could slow me down. These boots are quite grippy and can stop a person in motion very effectively, so much so that they've nearly caused me to fall forward on several occasions. As a result, taking off into a sprint is similarly easy as your feet don't slide around at all. But there is a downside to the soft sole, and that's on tile and linoleum floors, especially when the soles are wet. Every step will squeak absurdly loud if you go from outside to in on a wet day. Not much of a big deal for a paintballer, but if you're a curious law enforcer or military type reading this and thinking these might make for a boot that one can sneak around in, I'd recommend avoiding these boots, everyone will know precisely where you are at all time if these boots are moist.

Overall, I feel like the Original SWAT's aren't a boot which is worth 30-40$ more than the 5.11 equivalent. A lower price point might make me feel a little more fond of them, but I paid for these on sale what I would have paid for 5.11s at full price and am not convinced it is in any way superior, in fact, I think these boots lack some of the features the 5.11 ATACs have, and feel that the next time I need to make a boot purchase I will go with what's been tried and true for me.
Posted by Kris at 4:54 PM