PS: this is the same mask as in the Feb 22nd Valken Milsig gear shoot a few posts back, you can find more mask media Here
Posted by Kris at 9:54 AM 3 comments:

RANT: "It's Not Real Enough" Part I

I don't think I've done this yet, I haven't gone off on a seemingly vicious tirade regarding some paintball related topic on the blog yet so I'm actually going to try and be nice when I do right now so as not piss any readers off. Oh I'm back on the Milsim path again, FYI, I know I was branching off there for awhile but we're definitely back on topic talking about all things that are meant to look black, brown, and green. I digress... I call this the “Not Real Enough Part One” Rant because I know there will be more realism posts in the future. There is a certain something I bump into on forums in particular that grinds my gears more and more every time I see it and it's so silly... it's aesthetics. Not what owners do to their guns but the way the markers come from the manufacturer.

There's too many complaints to tackle at once, or perhaps ever so I'll mention the most common one I encounter, especially with Milsigs and other assault rifle Milsim markers: gaps between magazine wells and triggers. There are a lot of stocks and front ends that look and feel delightful, and barrel wise most tactical marker manufacturers do a really good job of making a barrel that looks and performs well given the .68 calibre parameters they have to work with. Receiver-wise though things aren't always so great and some people just can't be reasoned with. I can't address every issue that every receiver has which makes nay-sayers say nay, but every Milsim marker receiver has one of three problems which haven't effectively been worked around yet. One and two are closely related: if you manage to rig the marker so that mag well and trigger are smack together like on the real thing, you end up with (1) a whole length of extra marker receiver hanging off the front or (2) hanging off the back. In the case of the BT Omega it's particularly pronounced at the front, less so on the TPN Bravo One, and it can be seen at the back of the RAP4 T68 (Images below for your reference). With Milsigs and souped up Tippmann A5's and 98 Customs, there is a gap between the trigger and mag well and no extra receiver hanging off the back or front. What you gain is return is another spot for air supply in that spot, though not on the C98. Look to the left and you can see all the markers I'm talking about as well as the actual Colt M4and can decide for yourself what looks most real. Keeping in mind of course that ll of these markers can be mag fed with the new Tacamo receiver modification kits. I have to say that I'm really partial to the Milsig design, and I'm not saying that just because I own one. You can run an air through stock or air in stock system, and if that's not your cup of tea you can connect your air directly to the bottom of the power tube between the mag and trigger or run a steel braided bottom line to connect your air on the back of the pistol grip. Not even the Tippmann A5 offers that many options for air connections.
What's really mind boggling about aesthetic and realism complaints is when they come from someone using a hopper fed Milsim-like scenario marker or when a speedballer has something to say regarding realism! I've been on the receiving end of this treatment before: “Nah, that gun doesn't look real enough, I'll do it right or not do it at all. 'Scuse me while a fling some ropes of balls, bro.” Wow, just wow. I have nothing against hopper-ballers, having a hopper on your gun means nothing to me at all and I'd hate for anyone to think I'm being an elitist and saying if you don't run magazines you're not Milsim. Tac-cap, 200 round, Rotor or Prophecy, it's all great as long as you're playing and having a good time but I have to grimace and roll my eyes when someone lectures me on how real my M-Series Paradigm ISN'T while they walk onto the field with a TM-15 which has no gap between the trigger and *fake* magazine, and more paint than I shoot in a day.
Muffin, I'm sorry it's not real enough for you, but until you become a wiz kid with pneumatics and deliver your proof of concept Milsim marker, could you maybe keep the arrogant aesthetics critiques to yourself? I'm not calling anyone on the Milsig forums out here, 99% of the guys who have made the comment there I have a lot of respect for and they haven't let this hinder them in buying a Milsig. The only reason this bothers me is because I really have encountered hyper anal milsimmers, speedballers, and airsofters who make aesthetics the most important factor in a purchase and disregard performance. It's so phenomenally unimportant.... missing that gap between the mag-well and trigger guard still makes you less intimidating than a clever new player with a rental gun.
Posted by Kris at 2:22 PM 2 comments:

A few short months ago, Valken, via their Facebook page put up a shout out for paintball teams they were looking to sponsor for the 2011 season. This was in early February when new blog posts on here were a much more frequent occurrence. Being the charismatic fellow that I am, I decided to contact the gentleman at the email address provided in the call out in regards as to what it would take to get a team in Kamloops sponsored, and what the team's obligation to Valken would be in return for a gear discount deal. After several days of back and forth emailing, the creation of a group Facebook page as a communication hub for a team, and rounding up some players since I had no people on board at the time of first contact, a Valken sponsored Kamloops paintball team was created. 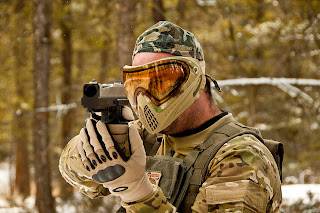 As something of a shameless self plug, I'm going to announce all you regular readers the creation of the Kamloops Paintball Games: Fusion paintball team. The choice in team name can be best explained in the last 'Haters Gonna Hate' post on the next page of posts. Some might describe the team as a clutch of recreational paintballers but I'm hoping to quickly shape this team into just the right kind of effective blend of both speedball and milsim play styles working in tandem with eachother.
I know, it seems like I'm doing a big self plug for myself and the team mates here but the experience is going to be a great thing for the blog as well. Aside from just being able to make nice big galleries of not one, but all six of the camoflages that Valken offers in the V-tac line, I'll be able to provide reviews of both the Sierra and Zulu builds of the gear. The blog will also start to double as a log of the goings on in the team, from start to finish so not only myself, but you as well can read along about the good moves we make in regards to gaining sponsorship and attending events and some of the bad ones we make too. This team was non existent at first contact with Valken and now it's really starting to take shape so I'll also be able to make some 'how-to' posts for new teams regarding approaching companies for sponsorships, how to structure your letters, what to have on hand when you first try to get their attention.
It's going to be awhile until the blog sees a new post as two weeks of non stop school work and season's opening clean up work at the field are fast approaching. Four weeks until school is out for summer and many months of reffing, playing and blogging are to be had, so for you guys in the lower latitudes who are already out of the snow, happy playing until then
Posted by Kris at 10:03 AM 5 comments: