I tend not to post news items here, but this stuff got me pretty excited. New markers have been appearing on the Milsig Owners and Milsig Industries pages over on Facebook for the last two days and it's been stirring up a lot of talk. Nelson over at Milsig is pretty strict about not letting the company turn into a hype machine, so anything new coming from them makes even their most manly fans giggle like excited school girls. These are Nelson's three aces as he calls them, and they are a new limited edition Paradigm, a new mass market platform known only as the M17 (no relation to the M-Series), and two fairly substantial pistol to carbine kits for the T8.1 and TPX called the FXR. 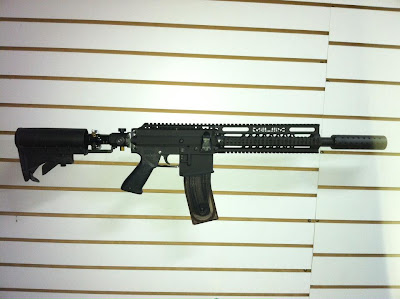 Above is the new Paradigm Mk II. As you can see, there is the CNC'd hand guard we know and love which has been elongated on the new model, and the 13ci air in stock which appears to supply air directly into the back of the marker; no side air line. It can shoot first strike too, no word on if the pictured barrel is what will be included with the marker or if that's a Marksman Barrel. Also, it would appear that Milsig has finally found a way to close the gap between the magwell and trigger guard. Nit-pickers rejoice! There is debate over what the internals of this marker will be like. No confirmation has been given over whether it will use the same blow back design as the original and Mk II K-series markers, or of it's something we haven't yet seen in a Milsig; with a little luck, it will operate on lower pressure, so those of us who have troubles getting a Milsig over 270 fps out of the box will not have this issue any more. 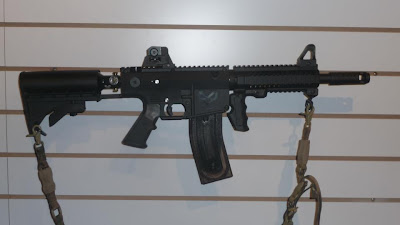 This is the M17 and receiver and internal wise, should be fairly identical to the Paradigm Mk II. This is the cast aluminum, non limited run model. It is also first strike ready.

This is the FXR Force Multiplier Pistol to Carbine kit, which will be available soon for T8.1 and TPX. Word is there will be Air thru and air in stock options of this kit which is pretty nifty.
More details about these two new markers and kits will be unveiled on the 28th at the upcoming paintball exhibition, like just what kind of internals they have, pricing, and what will be included with these markets when you purchase them. No word if Nelson has a fourth ace ready to show, but if he does, I think I know what we all hope it would be. I'll be sure to follow this particular story closely.
Posted by Kris at 8:34 PM No comments: